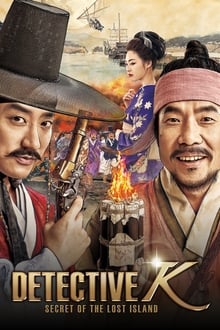 The comedy is launched at a time in the economy when there is significant amount of fake silver circulating in the Joseon dynasty. It is interesting how the producer brings out humor in a detective case involving key aspects of the economy. There is also a story of a young girl seeking help from sibling in a case involving the fake silver. The issue goes beyond money and power; it escalates to murder as several bodies of girls are discovered with cases linked to counterfeits.

Kim Myoung-min and Oh Dal-Su as well as Kim Sok-yoon are the key participants in the detective story as they discover channels of counterfeit and the beneficiaries. While characters differ in perception and direction, the dynamics of the play remain the same as the plots join at the end. Each of the stories will be familiar if you consider the basis of deaths and fight for power. As the technical industry of Korea continues to improve, production values change significantly.

The Korean economy is widely dependent on silver as a fundamental of the national currency. In the film, Kim is tasked with identifying the ongoing smuggle business of silver that compromises on availability of the same and government control. Silver smuggling is a real threat to local and national trade. When the currency is in control of locals with unclear intention, the systems will lose effect hence breaking the economy. The fear of a failing economy is the basis of the detective work by Kim.

Kim and his assistant Seo-phil discovered most of the mysterious deaths and other atrocities in the land are linked to the smuggling business. The fact that smugglers have the resources, they can buy power and cover up for most crimes. The two are considered private investigators with best interests of the country, a common good for the community. It turns out that there is a bigger problem than national stability.

The long-suffering and emotional elements of this play makes it a favorite in the genre while previous productions took the industry by storm, the audience shifted their attention to the detective tales immediately after the launch. The characters don’t put in much effort in bringing out the humor because the storyline is already an interesting element. Self-depreciation comes out conspicuously to build the status of this comedy.

The main actor of the comedy is renowned to be the first Korean actor to accumulate over 100 million ticket sales from filming. As the comedy show sells and rises to popularity, ticket sales linked to the actor and producer accumulate hence his growing fame. He has the charism and confidence to make the best character for most of the scenes. The humor comes out naturally and relates with the Korean culture.

The Detective movie is a constant swing between action and comedy. The wide popularity of the show is attributed to its universal style and creativity. Fans of different genres have something interesting to identify with the film. You simply can’t be bored with the movie because of the creativity and charisma in each of the characters. Some viewers get jittery with the enslavement scenes but it brings out beautiful themes of society and humor in the process.

The costume and production design attributes for popularity of the film. The period details can easily persuade you to buy the film. A trailer is enough to win you to spend time watching the movie. Use of classic techniques also draws attention to characters, which is a strategy employed by the film director.